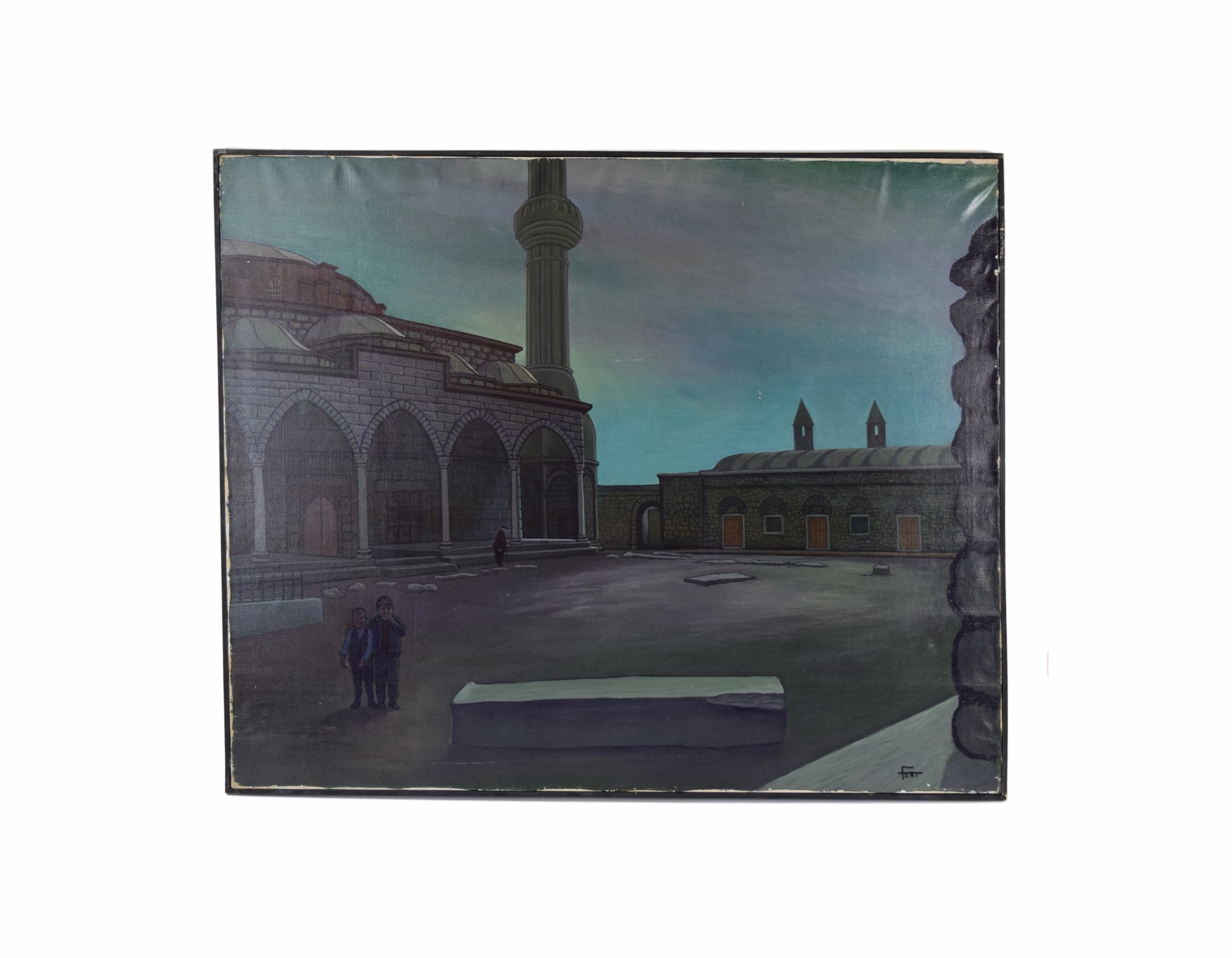 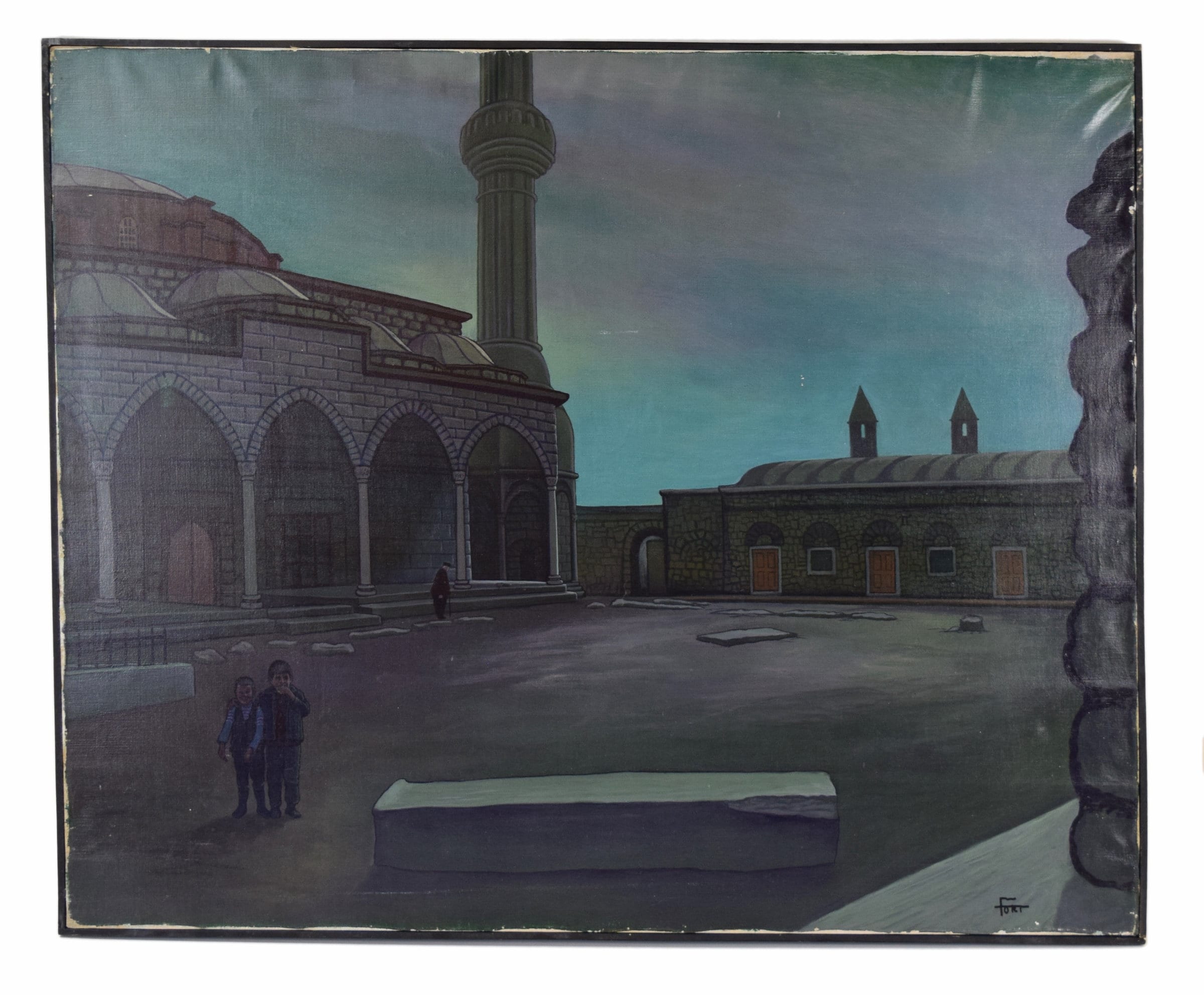 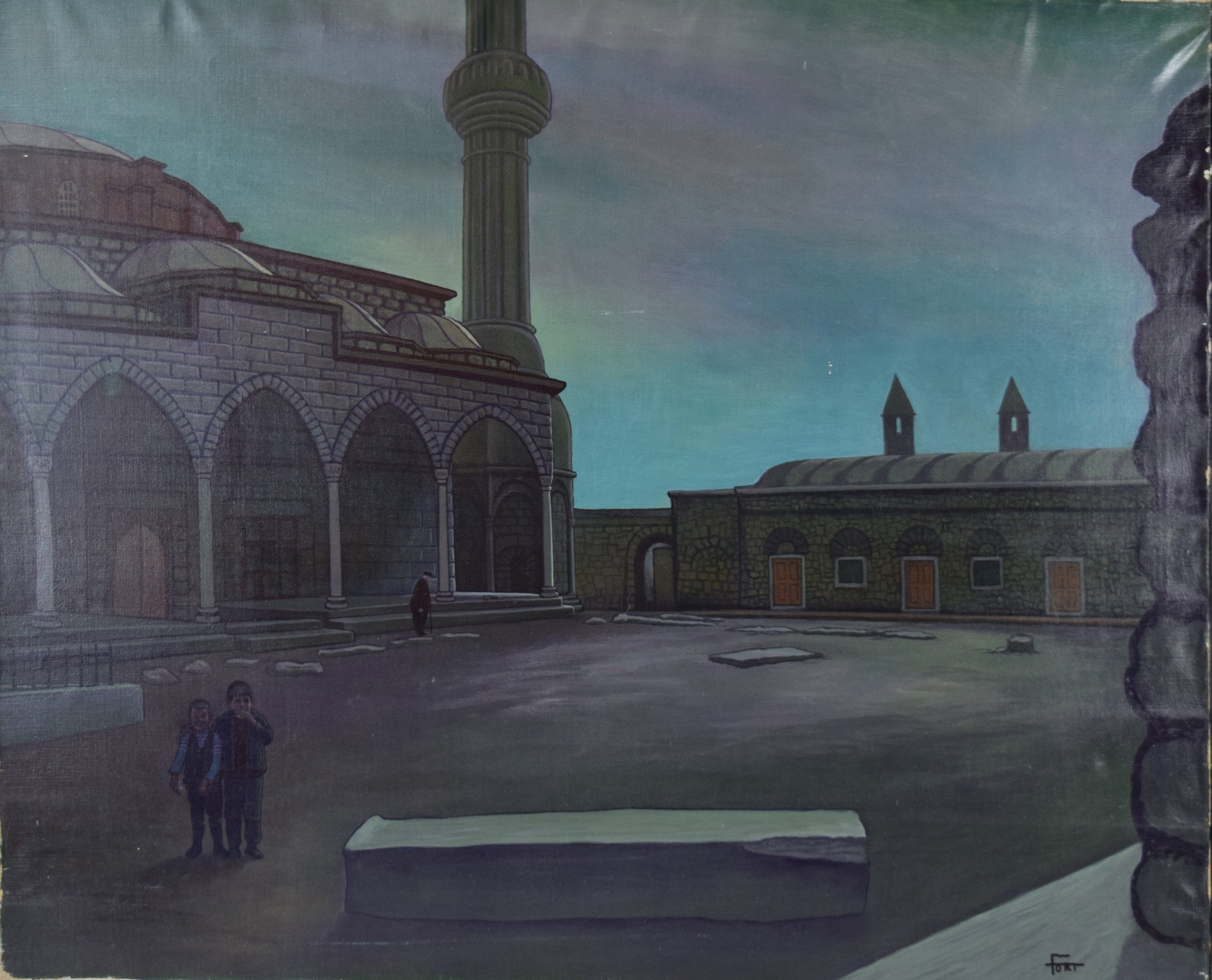 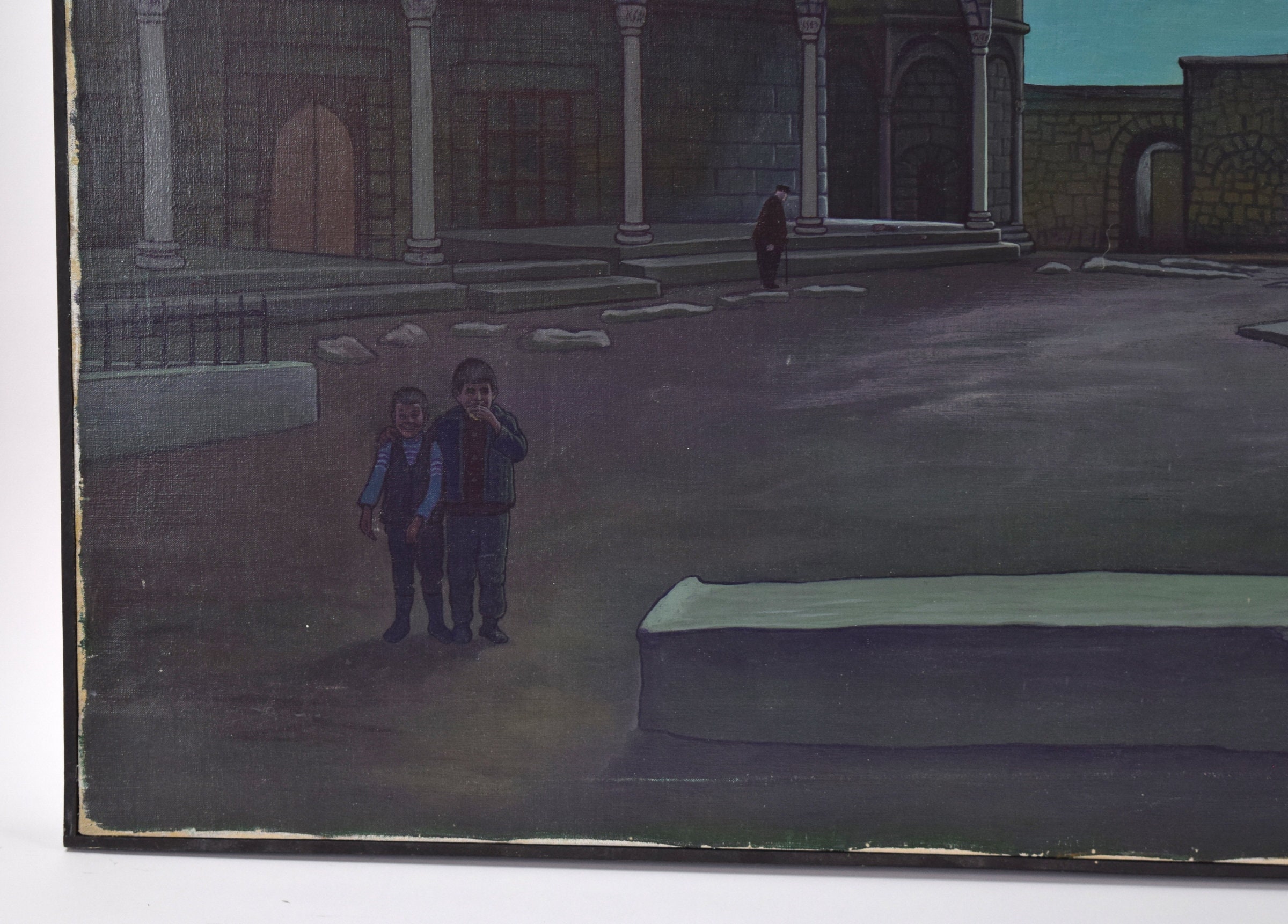 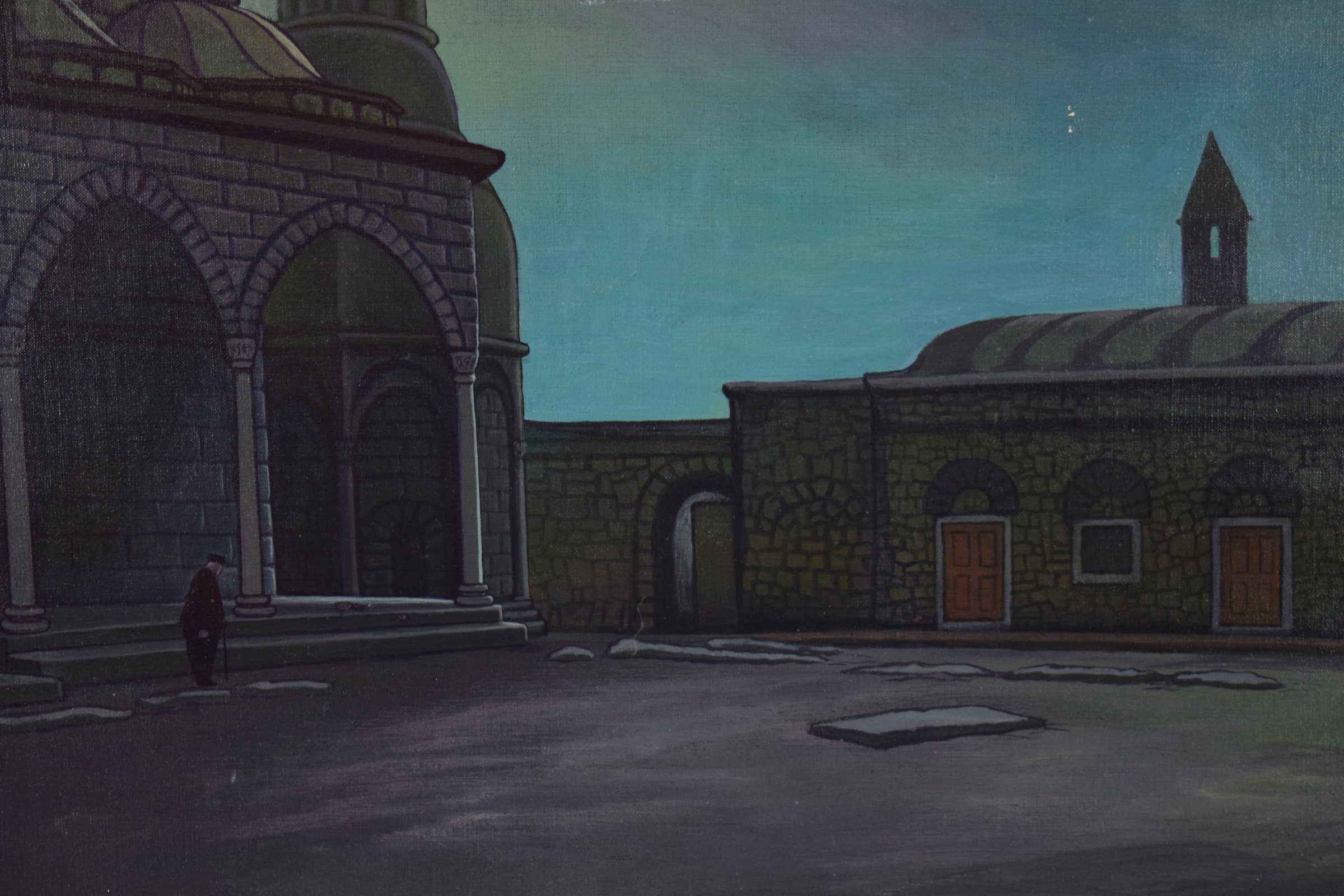 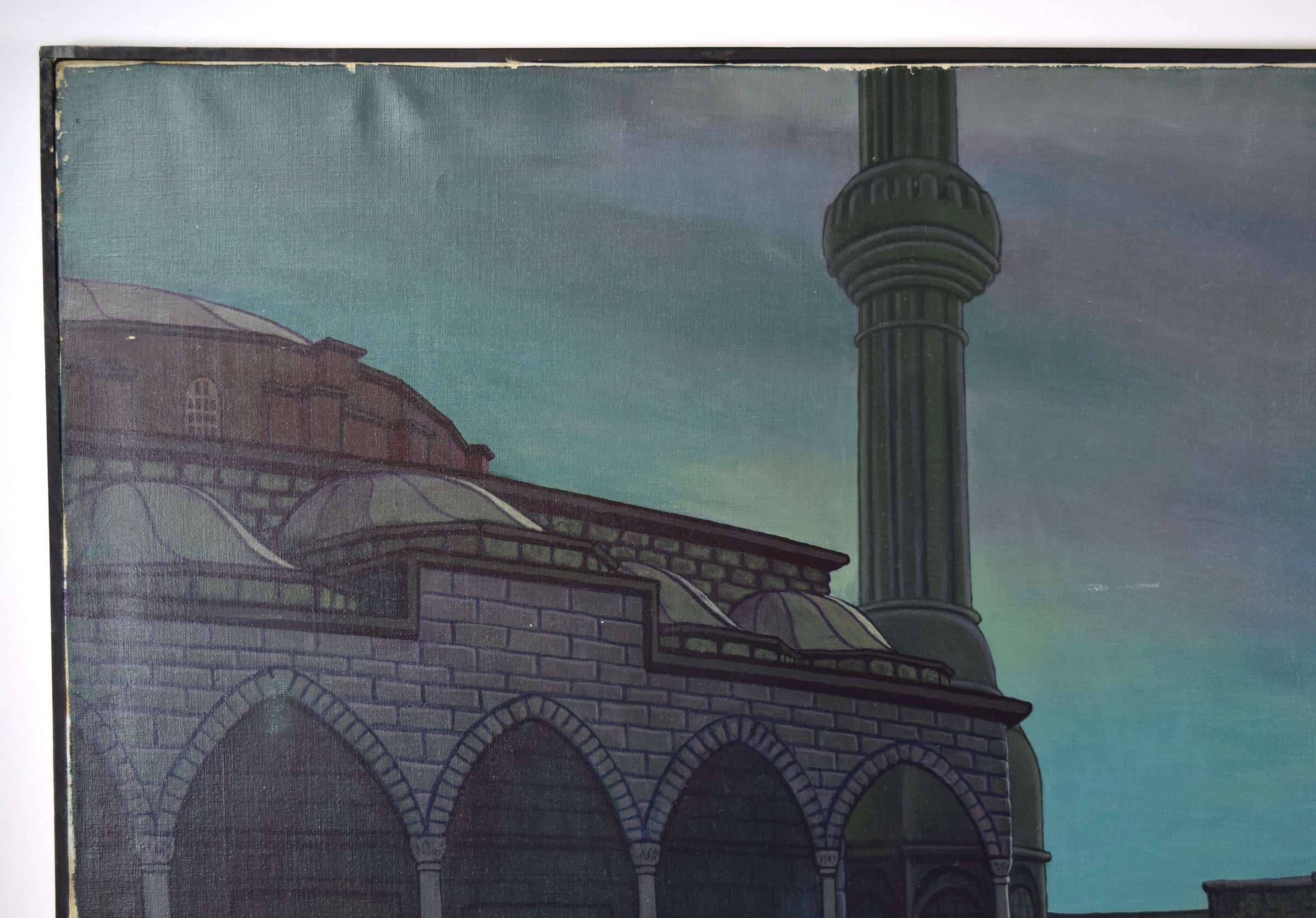 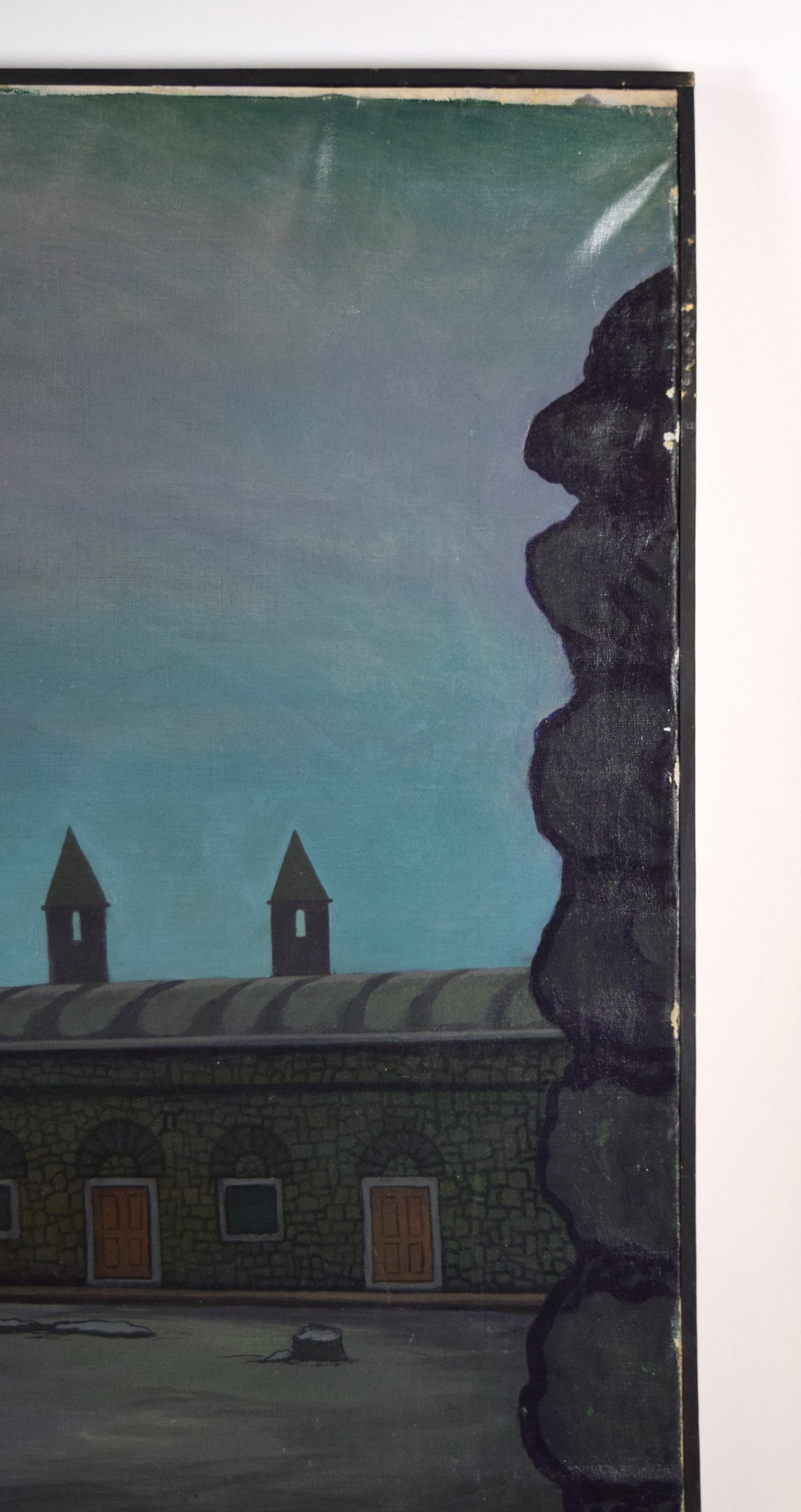 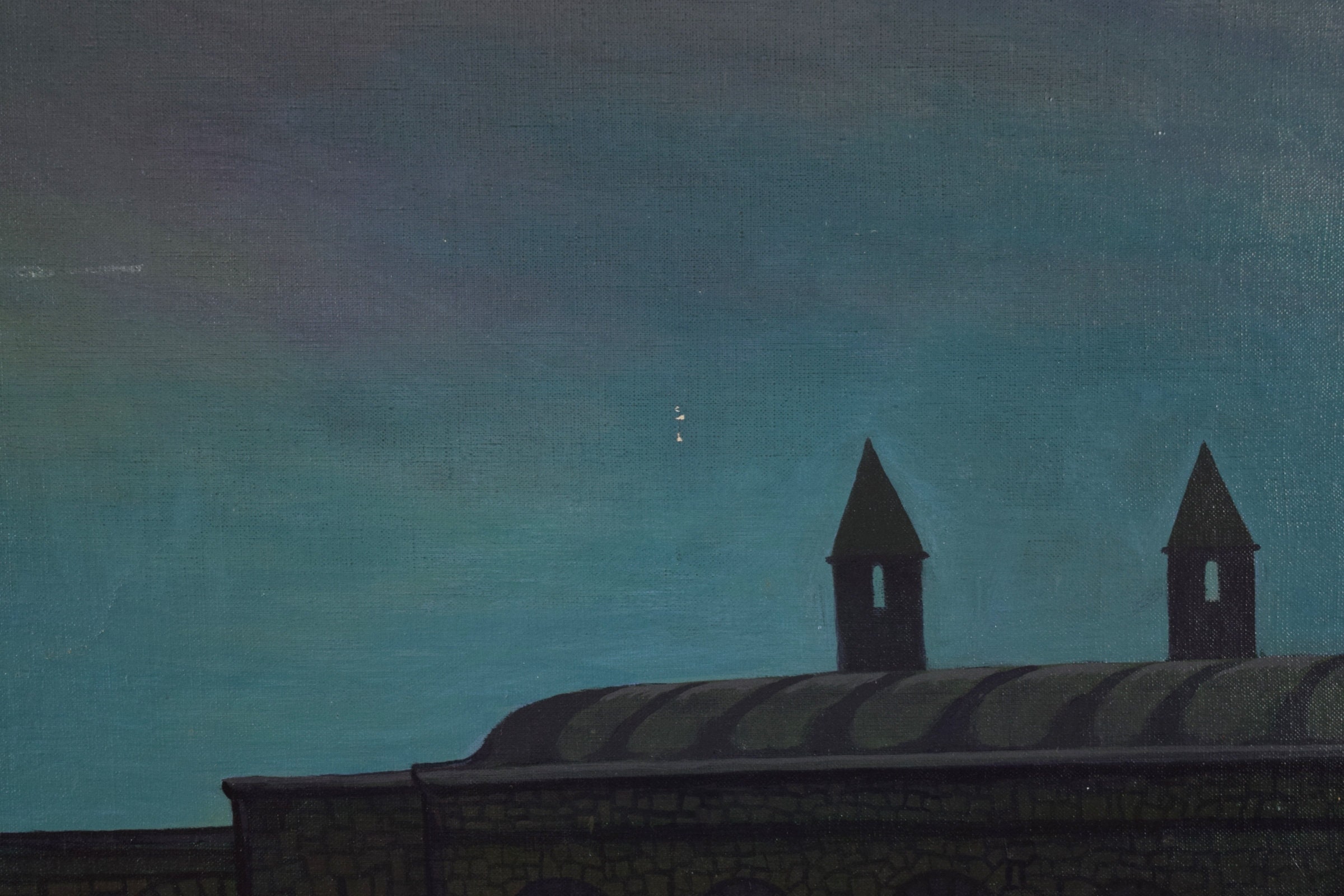 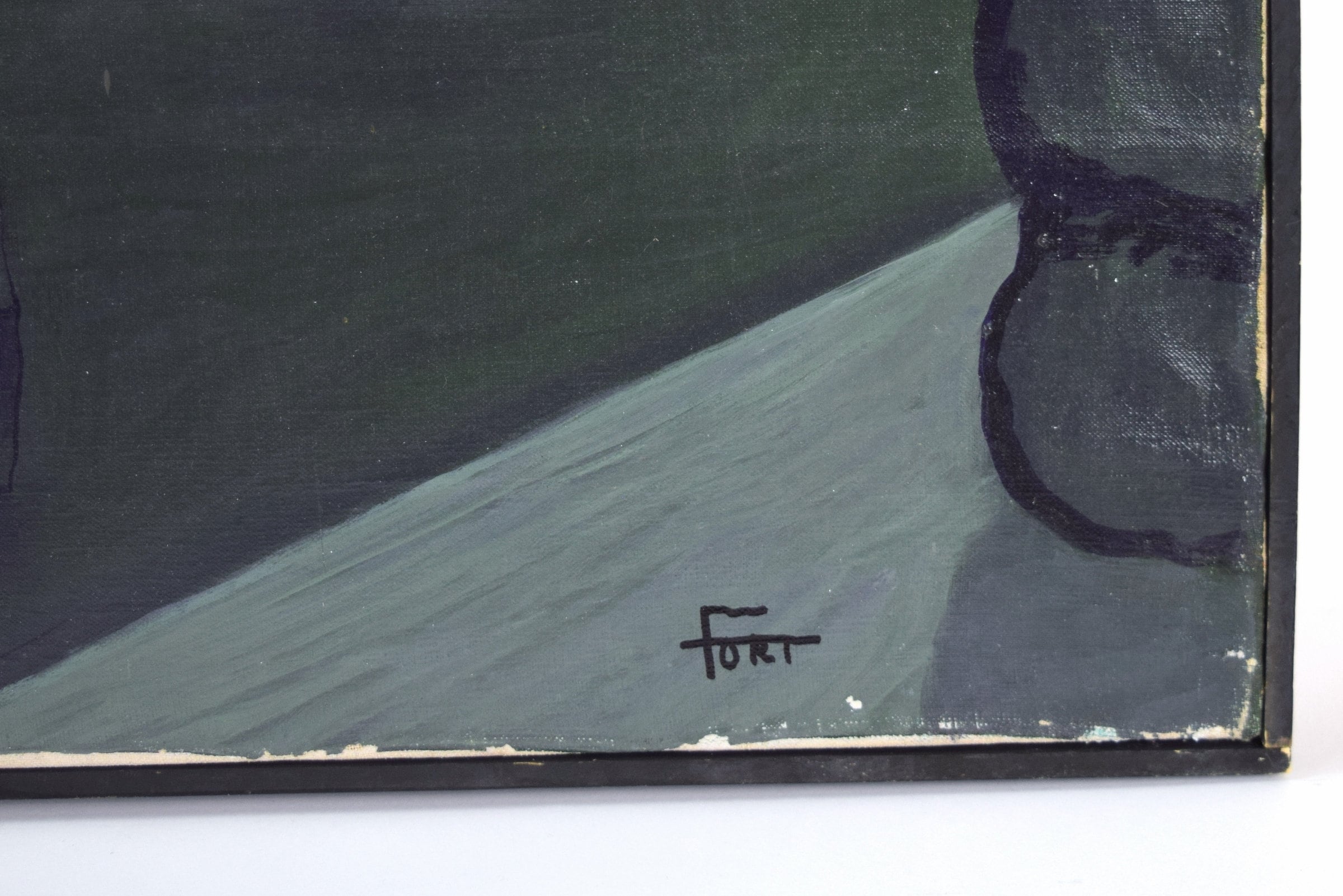 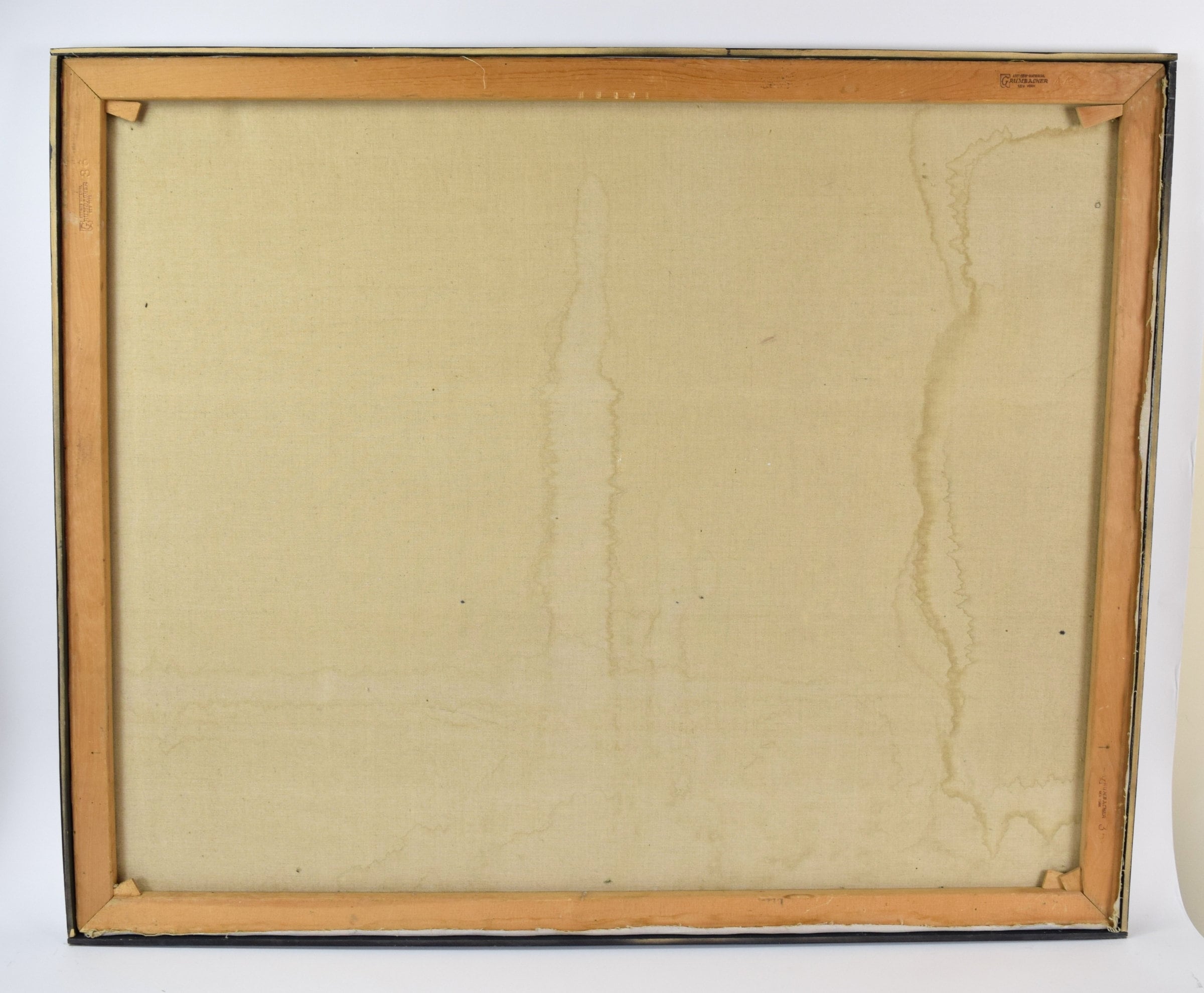 Richard “Dick” Lindsey Fort (American, 1922 - 2016) “Sergius & Bacchus”, circa 1960’s, oil painting on canvas. Signed lower right. Depicts two boys standing in front of an early Byzantine Church of Constantinople. Signed lower right. Purchased directly from the artist’s estate. Framed in artist made simple wood slat frame, stretched on wooden stretchers. Measures 45in x 37in framed and 44in x 37in image only. Condition: a few minor scratches and sesame seed sized chips, artist didn’t paint fully to the edge so some white space is visible at edges. Could be correct when framing or re-stretching.

Biography: Richard "Dick" Lindsey Fort was born July 6, 1922 in Mitchell, South Dakota, The family later moved to Sioux Falls. Dick graduated from Washington High School in 1940 and went on to Grinnell College in Iowa, majoring in English and German. Called up from the army reserves in 1943, Dick trained for World War II as a combat engineer at Fort Leonard Wood in Missouri. But he was soon singled out for advanced training in a special German language unit at Kenyon College in Ohio. In 1944 he trained in London as crypto-analyst in a mobile Signal Service Company. Following D-Day at Normandy, Dick served as a code-breaker, intercepting German war-front radio messages in France, Belgium, and Holland, moving with the troops in their march to the Elbe River and down into southern Germany. He was awarded battle stars for pin-pointing enemy artillery and armored positions during his war-time intelligence work, especially in the Battle of the Rhineland. Dick mustered out of the army at Christmas 1945, in England. Suffering from undulant fever due to contaminated milk in France, he spent a year recovering at his parents’ home in Sioux Falls. Returning to Grinnell College in 1946, Dick used credits from his wartime German training at Kenyon to graduate in one semester. Thinking to become a novelist, in 1947, Dick began work on a master's degree in English at the University of Chicago. But in 1948 he switched to studio art at The Art Institute of Chicago, under the GI Bill. He completed his BFA in three years, and the equivalent of an MFA in 1952. Dick taught Art History and Studio Art at Grinnell during 1952-54, but decided in 1955 to make a living as an artist in Chicago. In the 1950s and 1960s, Dick ventured out from his Near North Side apartment to sketch and later paint scenes of people in cabarets and lounges along the famous nearby Rush Street nightlife area of Chicago. In the early 1970s Dick joined with a younger colleague and a house painter to open a small gallery on trendy North Lincoln Avenue in Chicago. Funded by Dick for a couple years, the Triforum Gallery in front offered space for aspiring local artists to show contemporary works and, in back, provided his own studio space. This information generously provided by website dedicated to his memory - Search online for "dick fort wixsite" for more information about Dick Fort’s life.

9.75% sales tax due for items delivered to IL or picked up from our warehouse in Glenview, IL. Items picked up by licensed shippers who provide a legitimate bill of lading or pickup receipt for an out of state delivery address are exempt from sales tax in IL.

When we are the shipper, we will carefully and professionally pack your item with all new packing materials and it will be fully insured. Materials, handling and insurance are all included in our shipping charges.

Certain pieces are too large for us to pack and ship safely, which will be specified within the listing. While we cannot ship and insure larger pieces, we are happy to suggest third party shippers.

I gladly accept returns and exchanges

Ship items back to me within: 30 days of delivery

But please contact me if you have any problems with your order.

The following items can't be returned or exchanged

Because of the nature of these items, unless they arrive damaged or defective, I can't accept returns for:

We hope you are thrilled with what you buy from us. If for any reason you are not, We have an unconditional money back guarantee on all we sell. Contact us within 14 days of receipt of item to initiate a return. Shipping fees are not refundable.

0 items in your cart